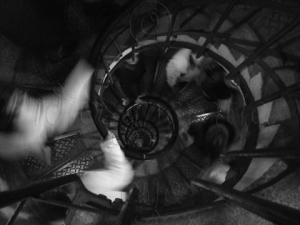 Today’s date is pretty cool.  10/11/12.  Maybe you’ve already had that date if you’re in America, I’m not quite sure, where numbers start getting meaningful is where they also start getting too complicated for me.  I guess it would have been even cooler if I could have pressed publish at 08:09 or something but that would have required a little too much organisation, coordination and forethought from me.

I remember way back when I was in school, a teacher pointing out a palindromic date (I can’t even remember what it was) but I’ve always loved patterns.  Although I drew the line at spending so much time studying them in Middle School Maths.  Palindromes and the Days of the Months poem are all I have to show for four years of mathematics at that school.  Worrying?  Probably.  Did you know that the first words Man said to Woman were palindromic?  (And courtesy of the internet, I’ve finally worked out to spell that, however, it isn’t how I’ve been attempting to say it all these years).  Oh yes, apparently he said (before English was even invented however, akin to that same terrible premise of sci-fi films):  ‘Madam, I’m Adam’.

(Although they clearly hadn’t invented punctuation either at that point though.  That can be such a pain, although it does have its uses, I guess).

A slightly more disturbing trend also was established today.  Do you remember that about year ago I burned my bonce?  It was a particularly unpleasant and at times, painful, not-a-good-idea.

Today it wasn’t my bonce but my bounce.  This possibly was also more painful.  I’m not sure.  Time has at least done some healing for the previous occurrence (although I am still excessively cautious about pouring boiling water).  This morning I fell out of the loft.  Yes, you did read that right.  My grip totally and utterly failed.  And that is what I was most upset about, I may not always have the oomph to hoik myself into the loft but I can usually rely on my grip.  Not today.  I was painfully reminded that I, yet again, haven’t been as well as I would like this week.  I broke nothing except my fall which considering the tiny hallway and the hazards present was pretty successful.

I’m sure that I will survive but I now have a very good excuse for buying a new, reliable, stay-put-able loft ladder.  (Now to cough up the pennies!)  I’m also likely to now be very cautious what I do in the month of November, well, at least until next year.

9 thoughts on “Patterns and Disturbing Trends”