Once a month, me and my friends (I’m sorry but ‘my friends and I’ just sounds way too pretentious!) meet up to knit and crochet together.  We each take turns hosting it and the original idea was that we’d of course have a drink alongside (tea or coffee being somewhat obligatory in this country at least) and maybe a slice of cake.  Maybe.

The maybe cake has turned into a full-blown tea (of the afternoon tea variety and not the meal which may also be called dinner or supper).  I’m sure that you can believe that we are very conscientious in our sampling of all the wares!  Whilst the hostess is technically responsible for producing the eats, most bring ‘a little something’ too, resulting in quite an abundance and variety of delicious treats.

Last month it was my turn to host.  We don’t have an official rota but we’re running out of places that are big enough to take us all, our little group does seem to have expanded over the last year.  I have quite a big sitting room which is presentable but is in a rather derelict rest-of-house situation, especially when it comes to the bathroom.

It turns out that good friends are completely nonplussed by such issues.  They can also relate plenty of their own tales of DIY woe, although mine does seem to be on a particularly epic and enduring scale.  They genuinely believe that they’re just here to visit, knit (or crochet), chatter, preferably nibble/scoff and not to judge.

And I believe them because I trust them.

So I invited them all over.

But then of course started panicking.

Tiling means that my house is experiencing a particularly bad episode of dustiness and there’s something heavy and imperturbable about any kind of building dust.  This is also a lovely terracotta colour which guaranteed to show on everything.  (I mean, it’s bad enough that we have black shelves in the sitting room, they advertise their dustiness very brazenly).

And I would have to cook.

But I get Tired.

And I have been Tired anyway.

Maybe I had bitten off more than I could chew?

I have had everyone over before, which was where the real embarrassment lay.  It doesn’t seem like we’ve made much progress!  Or maybe enough.  I shared some photos then of what I made so I wonder if you would like to come to tea again?

My sponge cake was requested again so I really couldn’t not make that.  It’s a fairly straightforward although beating the egg whites to firm peak does require a chair and some television-distraction.

This was all that was left afterwards: 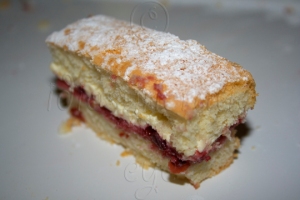 Not bad for a 26 cm diameter sponge do you think?!

(Well, several did take pieces home for spouses and children.  We don’t want them to miss out entirely!)

I think I’d like to invest in a square cake tin for the future, I use my round one all the time but for bigger occasions, it would be a lot easier to slice a smaller cake into squares then try to do wedges.  Wedges are fiddly things and tend to collapse.   You can more squares out then wedges.  You can see from the above photo that we ended up with rectangles after a while, we’re not quite sure how that happened from a round cake, but hey!  I just hand over the knife and tell someone else to brave it.  I don’t like cutting cakes.

But I did cut this one horizontally all by myself this time.  (I bake it as one cake and then it needs sawing in half with a very good knife).  It was a little wobbly and uneven but cream and jam hide a multitude of sins.  (Although they possibly produce others too!)

I also made some mini omelettes in bun tins, they weren’t particularly photogenic as I think I put too much spinach in. 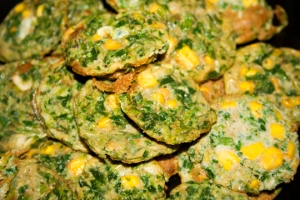 The first person who walked through my door that afternoon was accosted to try an omelette before I put them out.  I needed a taster, I’m allergic to egg!  They passed muster and out they went.  They did go down rather well, except for one poor friend who seemed to have all the chilli powder in hers.  Whoops.  We can laugh, fortunately.

If you want to have a go, use your normal omelette recipe but pour into bun tins and bake for something like twenty minutes.  Make sure you use a good quality bun tin because they will stick otherwise.  Even when greased.  (Ask me how I know!)  They’d be great for lunchboxes and picnics not just parties.

Then I moved onto a recipe that I first tried back in the summer but that didn’t turn out brilliantly at the time.  I decided to risk it again but use proper marshmallow puff for the insides.  I remember having the stuff when I was very wee (I’m not sure how or why because we were on a tight sugar-free diet at the time!) and I saw it again in America, the land of all sorts of amazing (and probably not entirely healthy) concoctions and confectionaries.  Friends send me a jar every so often.  But it’s now appearing in the supermarkets!  And the really good things is that it’s suitable for vegetarians whilst marshmallows aren’t.  Time for a marshmallow-fix!

I made whoopie pies:

There was a recipe ages ago in the Sainsburys magazine and I never got to make it then.  There was a brief episode when ‘they’ were trying to make whoopie pies be the next big thing after the cupcake invention/discovery here.  It never quite took off in the same way.  Although I can now get a box of ‘whoopie pie’ mix in one of the local supermarkets.  I use inverted commas because they are made of sponge with icing the middle.  Not batter, not marshmallow, not really a whoopie pie.

Apparently, whoopie pies started with thrifty Amish housewives using up leftover batter (well, America is the land where they eat pancakes and waffles for breakfast) by baking it into little pies to put in the husband’s and children’s lunchboxes.  They also spread them with marshmallow puff, something that seems pretty ubiquitous to an American childhood.  The name is said to have come from the reaction when they were discovered. 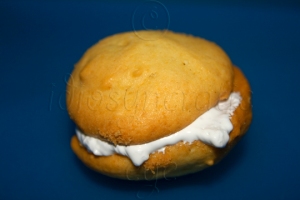 So I dared and I risked and I made them again.

The trick is not to use too much filling in the middle.  I thought that they would need loads to not be dry and bland but they just slip apart, disintegrate.  You only really need a smear.  Honestly. 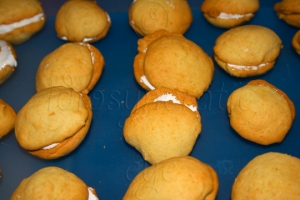 And whilst making them (having had a realistic moment and starting with the plain straightforward vanilla recipe), I decided that I wanted to ‘liven’ them up a little.  I had food colourings and hundreds and thousands at my disposal.  Hm.  Primary school artistic science came back to me, if I add both blue and red food colourings, I would have purple icing!  Yes, small things do really please.  And purple icing rocks.  I like purple.  (I blame having a deprived sugar-free childhood, colouring is making its way into my baking all the time now).  And in any case, pink always looks so twee and girly and predictable, no pastels for me, thank you! 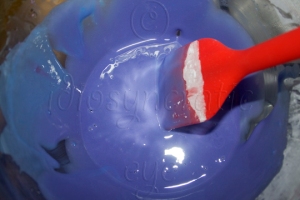 Well, the purple icing rocked but it kind of ended up looking a little too blue on the actual whoopie pies, it looked better on the tray.  Yes, I did make that much mess with the icing.  That’s why I had sensibly got a tray out.  And yes, I have told myself to refine my technique sometime.

But everyone loved them.

They are fun.  I’m looking forward to making some more.

Oh, and don’t use tons of colouring but it actually starts becoming taste-able in the icing and it’s not a good taste.

I also made some madeleines because I haven’t made any for literally years.  I flavour them as the Spanish do for their magdalenas, with lemon and almond but make them in the French-style.  It’s the best of both worlds. 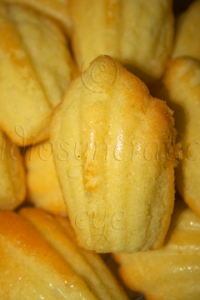 And amongst the treats that everyone else brought (and some had to take home again because we simply had more food than people or space!), was a cake that one friend had brought back from Hungary.  It’s a walnut cake and it’s more like a bread dough than cake per se and although it does look very dry, it’s yummy.  A little bit like baklava but not ickily sticky. 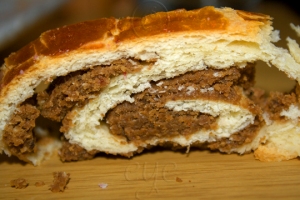 I have no idea what it’s actually called, Hungarian Walnut Cake but a little bit Bread-ish was working for us.

It was a lovely afternoon and it just shows that sometime it’s worth taking risks.  Real friends can be real friends.  And the sweetest thing?  One of our friends who came over later said to husband (who is even more paranoid and distressed at the idea of people coming over than I am and therefore was not told until after and evicted, hey, it was a strategy that worked) that she really liked our ‘posh’ flat.  Posh!  She takes things for what they really are, it is a lovely well-lit spacious flat, and not for what they might not be.  That really made my day when I overheard that a week or so later.

Yes, sometimes it is worth taking the risks.

9 thoughts on “Would You Like to Come to Tea?”