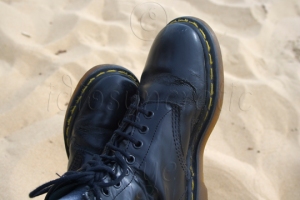 Tall, skinny, fair … I had it all.  The only problem was that those adjectives only applied in my family; anyone over five foot and less than a size eighteen qualified.  To the rest of the world, what was I?  What am I?

I’ve always struggled to see myself from the outside.  I know myself quite well from the inside and I wish that was the part more people focused on or took their first impressions from.  In my mind, I’m just some sort of amorphous gingerbread person and that kind of works for me.  Until I come face to face with a mirror or have to make some kind of superlative effort for an event or do or some such.  Then I struggle.  I struggle a lot.

I don’t understand the how much less the why of the external.  It confuses me when I try to approach the subject, I can’t get an easy handle on it.  I’m aware that females of the species do seem to spend extended periods of their childhood or adolescence practicing hairdos and face painting.  I seem to have missed that memo.  It was never on my to do list.  Maybe it’s me.  Maybe I just had other things to deal with as a teenager.  But part of me always ends up asking ‘why should I bother?’ and I don’t have any answers for myself because I don’t even know quite what that questions involves.

I think it sucks that women, in particular, are constantly bombarded with unattainable, unrealistic messages from some disturbed authority about who they should be, how they should, what they should look like.  I don’t buy in to that.  So I ask myself ‘why do I want to try to look good?’  Am I doing for others, because ‘society’ tells me that I should?  If I’m honest, I know that the ideal shape in an ideal world is straight up, straight down and skinny with it.  That’s my ideal world, not anyone else’s.  I’m a little envious of anyone who has this shape.   Simply because it would make clothes buying a lot easier.  But do I desire to be that shape?  Do I expect everyone to be this shape?  No.  When I cast my mind over people that I know, a few of them are but most of them are not.  I do not think worse or less of the others.  It doesn’t exactly feature in my mental top trumps list of attributes for anyone.  I value the inside more.

So if I’m not doing for others, who am I doing it for?  Is it alright to want to feel nice, to look good simply for oneself?  Is that not vanity or pride?  I eschew both of those.  I’m pretty good at self-neglect.  Most of the daily, never-ending  rituals of hygiene and prettification become wearisome and boring to me.  Should I make an effort?  Why?

I want to be the girl I was once.  For a brief window in my early twenties, I seemed to have it all.  I was a happy size eight.  A size that I had never even been raised to contemplate.  But then my physical health was fairly good; I was active – dance and movement classes; walking; even some football.  I was busy.  I was young.

I like to be ‘skinny’ simply because it makes me different from the rest of my family.  I associate it with being healthy, with being active and with being in control.  They are all things that I wish for right now.  But my life has changed.  My health has changed.  Nearly a decade on, how can I be the same person?

I don’t want this to be a slippery slope, an upwards descent to ever larger clothes sizes.  I don’t want people saying things like ‘I told you so, I knew it would catch up with you one day’.  I don’t want that.  But what can I do?

I never know whether it’s the clothes that are getting tighter or whether they just feel tight.  (Mongrel beast’s good old allodynia is alive and well).  Sizes are getting smaller too. I have some old pairs of jeans in the cupboard (they’re all worn out now) and they’re all the same brand, all the same size but there’s a difference of about two inches from the skinniest to the widest.  A straight up, straight down skinny friend of mine told me that her jeans were a size twelve.  I wondered what hope there was for me then when she’s like a quarter of the size I am.  Am I destined for a not-yet-invented size forty-eight or something?!

This body of mine is Chronically Ill.  I don’t have the choice to exercise.  Some days (alright, some weeks even), exercise is trying to make it to the bathroom.  I don’t do things for pleasure, for fun.  I can’t walk into town for a bottle of milk.  How am I meant to be in control of this body?  This is a body that fights IBS, that bloats and swells; this is a body that fights ME, that sags and puffs.  I have skin that shows every blemish and every mark.  I have skin that hates stress.

I’m not in control of my body.  I’m not in control of anything actually.  And that frightens me sometimes.  Being in control is important to me.  So perhaps that’s why I’d like to claw a little something back, just something sometimes so that I can feel a little bit good about myself, about who I am.  I get fed up of pyjamas and duvets and unbrushed hair.  I want to be in control, I want to feel nice once in a while.  Or at least kid myself that might be the case.

One thought on “Inside Out”