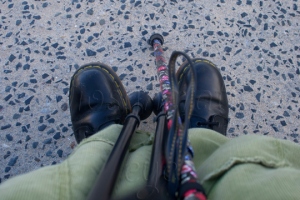 Me and ME go back a long way; I was first ill during my teens. A complementary therapist that my family knew diagnosed me with PVF (post viral fatigue) as I’d been ill, almost bedbound, all winter. I picked up but the following winter I was severely ill again. The therapist upped my diagnosis to CFS (chronic fatigue syndrome). I missed nearly two-thirds of my GCSE education because of illness. After seven years my GP at the time (bless his cotton mismatched socks) finally agreed to refer me to specialist services. He still held that it’s a psychosomatic condition but this was a great step forwards as he started with the belief that it was all made up (trust me, I’ve got better things to do with my life).

The specialist team were surprised that I’d not actually been diagnosed by the GP as all the evidence was fairly conclusive and presumably being diagnosed should prompt the referral, not the other way round! Since then I have referred to myself as having ME. I only saw the team briefly because there wasn’t much they can do or offer. I was supposed to be fairly adept at managing myself after all this time. Pacing was apparently the only thing that they could offer me and is often held to be the most reliable form of ‘treatment’ but the problem is that sometimes life gets in the way!

I had a nasty relapse at the beginning of 2014. You know, the kind where you say that just need to be dead in bed for a couple of weeks but then have to up it to three months then six months then the end of the year. And yet here we still are six years later. My style is well and truly cramped. 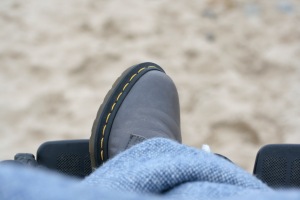 Some of My Thoughts on ME

In my opinion, ME sucks! (There you go, that about sums it up). But seriously, here’s some of my thoughts on the subject.

I still distinguish between three stages or grades of ME. (edit (07/12: This could also be seen as three distinct illnesses, see the Hummingbird website). This is the way I see it:

Sometimes because of a virus or some other trigger, people go on to develop an illness in its own right, CFS. CFS to me is a fairly short-term problem although debilitating, a person may suffer from a couple of bouts but they can usually go on to make a full recovery. However some individuals may suffer relapse later in life. (edit 11/20: I have become increasingly uncomfortable with the use of a single symptom as a description of an entire syndrome, that is a pattern of symptoms. Chronic fatigue is a symptom of way too many conditions, of causes both mental and physical to stand alone as an identifying marker. In short, it feels like a cop out. A rubbish bin label for patients that doctors have neither the will nor the resources nor the experience to investigate diligently. If you have chronic fatigue, knowing why is crucial for your prognosis).

ME is a severe, chronic condition that never leaves a person. It’s a lifelong illness which continues to affect the individual despite the good patches. Some individuals suffer a very severe form which is linked to increased deterioration and even death. Fortunately this is rare.

I also believe that PVF/CFS/ME can be umbrella terms, describing possibly multiple illnesses caused by various triggers and presenting differently in almost every individual. Whether conditions such as fibromyalgia are also linked under the same umbrella is often debated. The truth is, I don’t think anyone really knows.

I’m not even going to get started on causes and treatments! The whole thing is so hotly debated with everyone involved having their own particular preferences and pet theories, and that’s just the professionals. You’ll find plenty of information about that on the internet if you really want to jump into the mess.

Just a few links to some pages that will give you a little bit more information about ME if you’re wondering what it’s all about. I’m sure they can say it better than I can!

This a quick overview of some of the main symptoms of ME.

This has little more information about ME as does this.

If you’re wondering how badly ME can affect people then here’s some information on degrees of severity and also a wellness scale.

There wasn’t as much information around when I was a teenager but eventually I found this book in the library. It made sense of so much and explained things very clearly. It’s not very popular anymore because the research and understanding has slowly crept on so there’s likely much better resources out there but I was so grateful to find it. 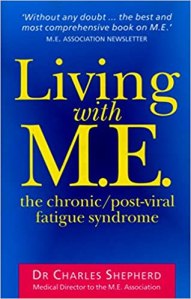 Possibly now it’s easier with the internet which can be updated so much quicker with the latest research but if you’ve got the energy and lay your hands on a copy, have a flick through.

Update (07/12): I am finding that The Hummingbirds’ Foundation for M.E site has the most accurate and reliable information. I have learnt an awful lot in recent months as I peruse the wealth of information available here, usually needing to look up every other word. My knowledge and appreciation (although not positive) of this illness has come along in leaps and bounds. Please visit this site, maybe starting with this overview.